Last June 18, the Search and Rescue Project successfully held its second Use Case (UC5 – VICTIMS TRAPPED UNDER RUBBLES) in Limoges/La Souterraine (France). The Use Case was hosted and led by International Emergency Firefighters (PUI) with the objective to test Search and Rescue Project components & technologies in 4 sites simulating incidents (victims buried under the slab, trapped in a car under rubbles or under a bus). Beyond the technical aspects, the event had a very significant impact in terms in dissemination and communication. The French National Television (France 3) was present on-site and did two interviews of project partners for the news. Finally, the UC became the cover of the French Regional Newspaper “Le Populaire”. These materials are available at the bottom of the page.

Use Case 5 in the Press

The French national television as well as a regional newspaper were present on site to cover the event, which resulted in a very significant dissemination boost for the project. Language is in French. 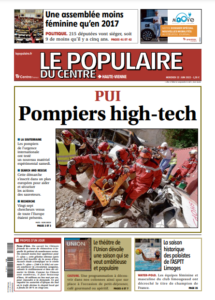 Being first and foremost a research project, contributing to scientific literature is a key component of the SnR dissemination strategy. On 17 June, a paper titled “A Proposed Methodological Approach for Considering Community Resilience in Read more…

SnR in 12th National Congress of the Spanish Society for Emergency and Emergency Medicine in Galicia, June 8-10 2022

Glad to announce that the Search & Rescue project participated in the 12th National Congress of the Spanish Society for Emergency and Emergency Medicine in Galicia. “Sea of talent, a beacon of specialty”, is the Read more…

Τhe Search and Rescue project was presented by ESDP at ISCRAM the 19th International Conference on Information Systems for Crisis Response and Management taking place 22-25 May in Tarbes, France. The presentation with the title Read more…